Every County Collector has his/her own way of recording the counties they have visited. I began by using a large county outline map of the entire United States, bought at The Map Store in Knoxville, Tennessee. However, after years of rolling and unrolling, marking, and coloring with felt tip pens, it disintegrated. I got another large map and had it laminated. I still use that map, although it is sometimes a bit unwieldy to carry on trips.

My favorite way of mapping my county travels is by using individual state county outline maps such as that of Missouri, pictured above. I not only color in the county, but also jot in the date of my first visit. Such maps can be found on the internet. One good source is the U.S. Census Bureau: http://www.census.gov/geo/www/maps/stco_02.htm. The University of Texas offers the same maps but in a slightly different format: http://www.lib.utexas.edu/maps/county_outline.html.

A very attractive set of county outline maps may be found at this site – although it may take a bit of searching to locate them: http://nationalatlas.gov/printable.html.

My wife and I actually have three sets of state maps in different three ring binders. They are labeled: Stephen's Counties, Karen's Counties, and Our Counties - our counties being those we have visited together.

We also record our travels at a couple of online county sites, the largest being Marty O'Brien's site: http://www.mob-rule.com/counties/. Carey Jensen also has a nice site where you can record your counties online: http://counties.visitedmap.com/.
Posted by J. Stephen Conn at 8:11 AM No comments: 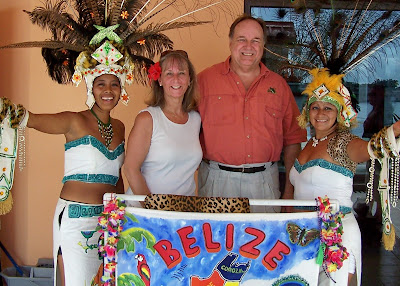 In Addition to counting counties I also collect countries. This past Wednesday, January 23, 2008, was a milestone in my country counting when my wife, Karen, and I visited Belize by cruise ship. Belize, once known as British Honduras, is the smallest of the seven countries of Central America. It has a population of around 295,000 and covers an area about the size of the state of Massachusetts. Belize is situated on the Caribbean Sea, bordered on the north by Mexico and on the west and south by Guatemala. It is the only Central American country where English is the official language, although Spanish and Creole are also widely spoken.

Having only one day in Belize did not allow us time to see much of the country, however we did manage to take a tour of downtown Belize City and also visited the ancient Mayan ruins of Altun Ha, a portion of which is pictured below. 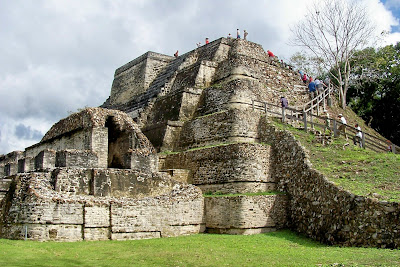 On another website I am recording many of my travels, both inside and outside the United States. You can take a look at: http://members.virtualtourist.com/m/4b7c5/

Leading Church Denominations in Every County

Here's a map which shows the leading church denomination in every county in the United States. I found it very interesting to study, and maybe you will too. Click the map for an enlarged view.
Posted by J. Stephen Conn at 11:30 AM 2 comments:

FAQ: What Counts in County Counting?

One of the most frequent questions I am asked from people who know I am a county counter is: "What do you have to do in a county for it to count?"

The answer is pretty simple - you just have to enter the county. Flying over it doesn't count, but if you cross a county line on the surface of the earth you can say you've been there. It doesn't matter if you are walking, on horseback, in a car, bus or train. If you or your means of transport is touching the ground in a county then it counts. 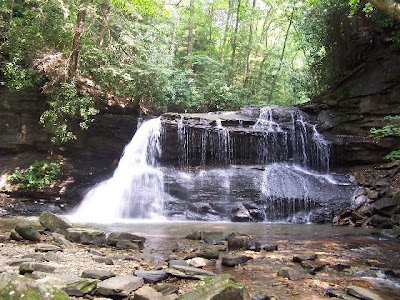 Suppose I step across a county line and one second later I am struck in the head by a meteorite and killed. Where will my obituary say I died? Of course, it will have died in the county I just entered. Maybe that's a bit morbid, but how can you die somewhere you've never been?

That said, county counting, or county collecting, is a very individualistic pursuit. Everyone who does it sets their own criteria. Most of the people who follow this hobby do so for their own personal reasons. For myself, I feel no need to prove to anyone that I've been in every county. If I cheat in my counting I cheat only myself. If I actually visited only 99% of the counties and said that I had been to them all, I would find no personal satisfaction in my faked
accomplishment.

It's because that the pursuit is an individual one that many county collectors have different personal criteria and goals. I know of county counters who have their picture made in front of every county courthouse, others who try to mail themselves a postcard with a postmark from every county, and a few who even aspire to climb the highest point in every county. God bless them all. Each of us is doing it our own way and, hopefully, having fun in the process.

Personally, I try to never just cross a county line and turn around, or drive through a county on the Interstate without stopping to see anything. To do that would be missing the whole point of the pursuit. After all, I'm doing this because I want to see as much of our great country as possible and that means taking the time to do a little exploring along the way.

My rule of thumb is to visit at least one recognizable landmark in every county I enter. It might be a historical site, a natural feature, a unique building, a state or county park or whatever I might find.

The two pictures on this post illustrate just a couple of the thousands of interesting discoveries I've made - things I might never have seen in my entire lifetime if I were not a county counter. The top photo is the North Fork Falls of the Holly River in Holly River State Park, Webster County, West Virginia. This is a wonderful natural area, well off the beaten path. Every time I see this picture I remember the summer afternoon when I took the hike to this falls and two others in the park and was amazed at the beauty and serenity of this special place. The bottom photo is of Cherokee Square - Capitol of the Cherokee Nation in Cherokee County, Oklahoma. This was the western end of the infamous Trail of Tears, marking one of the saddest and most shameful episodes in American history. Visiting here was especially meaningful to me because I grew up in Bradley County, Tennessee, where Red Clay State Historic Site marks the beginning point of the Trail of Tears.

Every county has a story to tell - maybe even thousands of stories for those who take the time to search them out. And every time I step across a county line I feel a tinge of excitement at what I might discover. 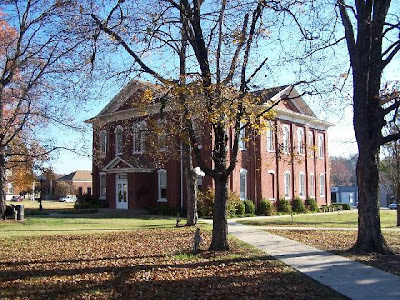 Here's an interesting website of a fellow county counter. . .

In addition to his County Collection, Froggie has some other neat stuff on his website that is of interest to road trippers. These include Magnolia Meanderings, Highway Heaven and Highway Photography. You can click him up on the link below and read more: