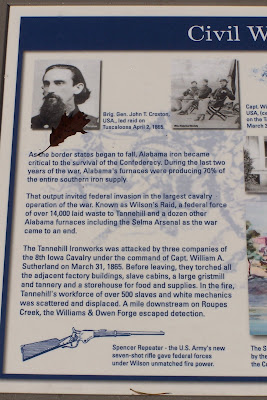 When a person sets out to visit each of the 3,141 counties or their equivilents in the United States he never knows what life changing discoveries he may make along the way.

This simple interpretative sign at Tannehill Historical State Park in Alabama, was a catalyst that made a deep and lasting impact on my life. When I first read it in December, 2004, I would never have imagined the quest for knowledge on which it would lead me.

I had read countless other such signs during my travels, but for some unknown reason this one particular one on that particular day resonated deeply with me - especially the simple description of actions taken by Union troops from Iowa who were here during the latter days of the War Between the States:

"... they torched all the adjacent factory buildings, slave cabins, a large gristmill and tannery and a storehouse for food and supplies. In the fire Tannehill’s workforce of over 500 slaves and white mechanics were scattered and displaced."

Whoa, I thought! The Yankees burned the slave cabins along with those of the white workers? Hundreds of people were left with no shelter, no food, and nowhere to go?

Although I grew up in the South, all my life I had been told that the Union troops marched south to free the slaves. If that were so, then why did the Northerners burn the slaves out, leaving them destitute, homeless and hungry. Elsewhere on the grounds of the Tannehill Historical State Park I saw a large patch of woods, marked as the site of scores of slave cabins which the Yankees had ransacked, plundered and then destroyed - cabins that would have been equal to those my own Irish and Cherokee ancestors lived in during the same era in Alabama and Georgia.

I began to make the connection to other discoveries I had made during my travels, such as a monument to black Confederate soldiers in Mississippi and an antebellum plantation in Louisiana owned by a family of black slaveholders. I had dismissed these things as flukes, but now I was beginning to see a patteren which contradicted most of what I had always assumed I knew about the War Between the States.

It occurred to me that somebody was lying about what really happened during the so called Civil War, and I determined to find out the truth.

Since that fateful day in December, 2004, I have spent thousands of hours studying about the Confederacy, the causes of secession, and the War Between the States. As I have read scores of books, I have continued to visit hundreds of historical sites, now looking for clues to the real story, unvarnished by political correctness. To say that the things I have learned have been an eyeopener is an understatement.

Okay, I don't have room to get up on my soapbox and tell it all here in this one post. Much more time and space would be required to do that. I am now now recording many of my discoveries on a blog. I hope you'll check it out: http://confederatedigest.com/.
Posted by J. Stephen Conn at 9:39 PM No comments:

The Road to Quoz, with William Least Heat-Moon 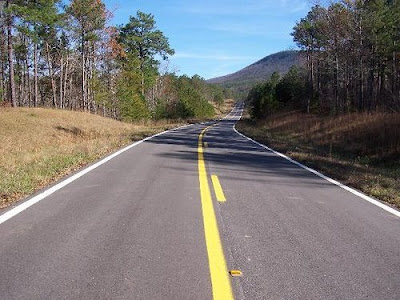 On one of my many road trips - several years ago - I took along with me a taped version of William Least Heat-Moon's book, Blue Highways, which I had checked out of the public library. It was so good I later bought and read the book. Heat-Moon is an outstanding writer and his book is a classic every traveler will relish - telling of his adventures on the "blue highways," or the state and county routes and back roads of America.
It didn't surprise me when I read an interview with Heat-Moon in which he said:
"I understand the slants and angles in America. I’ve been in every county in the United States — more than 3,000 of them. If you put your finger on a map of the United States, I have been within at least 25 miles of that place, except there are places in the Nevada desert I haven’t been yet. And a trip there is coming up."
William Least Heat-Moon has a new now titled Road to Quoz - an American Mosey.
Here's a link to the full article from the Columbia (Missouri) Tribune: http://www.columbiatribune.com/2009/Jan/20090104Ovat010.asp
.
The photo above is one I took on the Talladega Scenic Drive in Alabama.
Posted by J. Stephen Conn at 3:33 PM No comments: