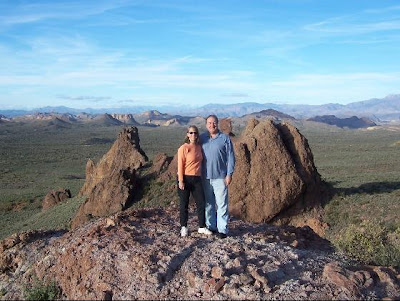 Counting Counties with Karen in Arizona
Although I was 50 years old before I started keeping a list of the counties I had visited, I wonder if the kink that makes me want to count counties might be hereditary.

My parents were not county counters, but both of them traveled extensively and kept a record of all the states and foreign countries they had been to - all 50 states and more than 60 countries.

Dad did have a younger sister, Fay, who is a county counter. I had been keeping a record of my own counties visited for a few years when I stopped in to see Aunt Fay at her home in Georgia. When I told her of my hobby, I was both surprised and pleased to learn that she had been counting counties for much longer than me.

Aunt Fay has lived on the same street all of her 77 years, and has never owned an automobile or even had a drivers license. Because of these limitations, she never aspired to visit every county in the United States. Her world didn't extend much past the State of Georgia. Still, as a young woman, she set out to visit each one of the 159 counties in that state - and did it.

Georgia is the largest state in land area east of the Mississippi River, and also has much smaller counties than many other states. For that reason, Georgia has more counties than any state in the union except for Texas. Collecting those counties is a daunting task for anyone. Aunt Fay did it by traveling via train, bus, or hitching a ride with family and friends. I wonder if anyone else has ever visited every county in Georgia without driving. She has my utmost admiration.

Even though it took me five decades of life to begin counting counties, I have collected similar travel goals since I was a kid. When I was only seven or eight years old I loved climbing trees so much that I decided I would climb every tree in the world. Of course my world was very small at that time. I climbed the dozen or so trees in our yard in Cleveland, Tennessee, and upon completion of each tree nailed the cap off of a soda bottle into the base of the tree to indicate that I had climbed it. Soon I had nailed bottle caps to every tree in our neighborhood, and also on many of the trees in Harrison Bay State Park, where Mom and Dad often took our family for picnics. I even climbed trees and nailed bottle caps in the woods near my Grandmother's house in Georgia.

Needless to say, I gave up on that pursuit at about the same time I quit believing in Santa Claus. There are just too many trees. Also, old trees die and new ones keep sprouting all the time. Later I have "collected" other geographically related things such as states, state high points, foreign countries, national park sites, hiking trails and more.

Maybe I collect travel experiences and keep a record of them because doing such runs in my family. Other people seem to come about county counting by catching it from someone else. My wife, Karen, is a good example. Shortly after we were married, just five years ago, she made a list of all the counties she had visited and came up with a little more than 200. Today her list is more than 900 and growing rapidly. Karen eagerly records her counties visited on every trip we make, and before one journey has ended she is already planning the next. Did she catch the bug from me? Maybe. But really I think Karen had the traits of a county counter all along - just waiting for the right spark to awaken it within her.

When I talk of counting counties some people respond with yawns or glazed expressions and quickly change the subject to something in which they are interested. I've had a few even rebuff me for counting counties, saying it is silly, or a worthless pursuit. I've decided that these folks don't have the same gene mix as me. They just don't get it, and they never will.

It seems to me that the thing which motivates a person to count counties is both hereditary and something you catch. First, you've got to have the makings of a county counter inside you: curiosity, the love for travel and adventure, and be a compulsive goal setter and list maker. If you've got these characteristics it still doesn't make you a county counter. Now you need a catalyst. It may be an article you read, a conversation with a friend, or some other spark that ignites your vision.

If you've got what it takes to be a county counter, you know it. If not, you probably haven't read this far.
Posted by J. Stephen Conn at 4:16 PM