Yesterday I posted an article from The Manhattan Mercury about Margaret Gates, who had just completed her lifelong goal of visiting every county in the United States. In an email from Jessica Grant, the writer for that article, I learned that there had been an earlier piece about the same woman, when she still had 18 counties to go on her quest. Here it is:
The USA, one county at a time
Retiree set to complete quest to visit furthest reaches of each state
Jessica Grant jgrant@themercury.com 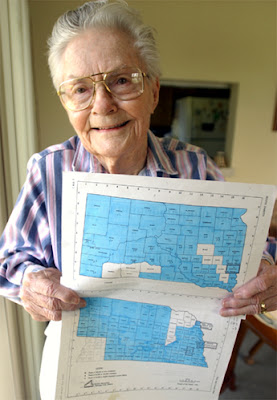 Margaret Gates shows maps of Nebraska and South Dakota and the handful of counties (in white) she has left to visit. Staff photo by David Mayes

The octogenarian has traveled the country for much of her life, and by the end of May, she will have been to every county in America.

"I only have 18 counties left — nine in Nebraska and nine in South Dakota," Gates said.

Her travels began soon after she was born. Her father, Frank C. Gates, was a botany professor at Kansas State University and each summer, before heading to the University of Michigan to teach for two months, he would take the family on meandering three-week trips to collect specimens for the herbariams he helped keep.

"Dad was trying to collect specimens from every county in the country," Gates explained. "My dad believed in teaching whoever he was with. All winter, David (her brother) and I would study maps and we got to help plan the trips."

Her father had a U.S. map on which each county was delineated, and Gates still has the map, each tiny square colored in, with the year the family visited the county marked in her father's neat penmanship.

Gates, a small, sharp woman who's spry for her 83 years, is straightforward with a sly sense of humor. She's a treasure trove of travel information but has no plans to record her stories.
"I don't write well," she said. "Everybody says to write my stories down, but I just like to talk. If you start asking questions, I won't stop talking."

She says she can remember the days when people still traveled by train — her family didn't get its first automobile until 1929, so most of her early travels were by rail. She says she remembers traveling on the first highways.

"The roads didn't have highway numbers then, just the names," Gates said, "and the only paved roads were in towns."

As she talks about her travels, she notes that Georgia is second only to Texas in the number of counties in a state, and that Alaska doesn't have counties, just population districts .

She says she remembers the first time she saw the word "motel."

"People didn't travel much in those days and we were in La Jolla, Calif., when I first saw the word," she said. "My dad told me it was a contraction of the words 'motor' and 'hotel.'"

The Gates family traveled in the days when access to public monuments was a bit more lax, and one of her fondest memories is sliding down President Lincoln's nose — at Mt. Rushmore, that is.

"(Her family was) at the top of Mt. Rushmore — we got to go to the top when they were doing repairs on Lincoln's nose," she said. "One of the men had left his jackhammer down on the nose. He asked if I wanted to ride down the ropes with him to get it, so I did."

Gates traveled with only the company of a string of Boston terriers, but said she was never concerned for her wellbeing.

"I never felt unsafe," she said. "I drove a 1959 TR30 and would throw a sleeping bag down on the side of the road and sleep. People told me it wasn't safe, but I never felt that way."
When asked what her favorite place to visit was, she sighs.

"Everyone asks me that," she said, "but the natural beauty of this country is our best kept secret. Every place has great spots. The Blue Ridge Mountains in Tennessee, when the rhododendrons are blooming — there's just something unearthly about that.

"But for me, the joy of traveling is seeing the horizon," she continued. "I used to drive a convertible and loved to drive across the plains at night and tilt my head up to watch the stars."

In 1991, when she retired as head librarian at Manhattan Public Library, Gates decided to finish her travels. She made a solid dent in her project, visiting the corners of America in a motorhome.

The travel project was almost completed when Gates lost her sight last summer to wet macular degeneration, a disease in which blood vessels under the eye's retina leak and cause scarring.

The bookworm says losing her sight was heartbreaking, but she's now discovered books on tape. She lives at Meadowlark Hills Retirement Community with her Boston terrier (who also happens to be blind). She still sees images out of the corners of her eyes, but said she has no plans to drive again.

Gates will finish her trip this summer with the help of longtime friends Charlie and Alice Michaels.

Although she has almost completed her quest, Gates said she will never feel as if her travels are finished.

"We tend to do the things we want to, don't we?" she mused. "Everything in life is a choice and I just happened to be more adventuresome than most."