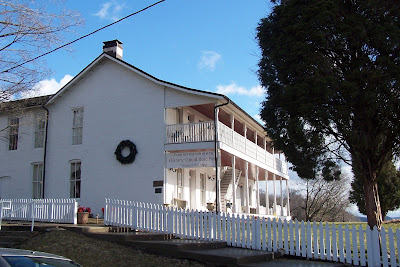 Grand Rose Hotel, Elizabethtown, Illinois
This past weekend my wife and I made a three day trip to southern Illinois, picking up five new counties: Gallatin, Hardin, Pope, Saline and Hamilton. That brought my total number of Illinois counties visited to 101 of 102. I hope to pick up my final Illinois county later this year when I take a road trip to Missouri.

It was not the best time of year to visit Illinois. The area had just suffered a severe ice storm a couple of days before. Highways still had many patches of ice and snow, especially over the rural bridges, and much of the area was without electric power. Also, a couple of roads we wanted to take had been detoured because of flooding. A friend of mine who lives in Illinois had advised me that the best time to visit southern Illinois is in the summer when he said it is beautiful. But someone who is intent on visiting every county in the United States can't always wait for good weather. If I traveled only at the peak season for each county I would never complete the quest. 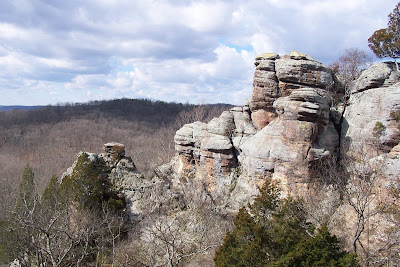 Garden of the Gods, Shawnee National Forest, Illinois
.
It is certainly possible to visit more than five counties in a weekend, but I've decided that's enough if a person wants to actually see something of those counties and not just go on a driving marathon. At five counties a weekend, 52 weeks a year, it would take more than 623 weeks, or a little longer than 12 years, to visit every county in the United States. This could be very easily done for the first many weeks. However, the more counties a person visits the further he must travel to reach new territory, so each trip becomes subsequently more difficult, more time consuming, and more expensive. If a person must be obsessed to stick to such a venture then surely I am obsessed. I find it to be a magnificent obsession - full of fun, adventure, and fascinating learning experiences.

Also, I should add that over the past several years I have averaged visiting just over 100 new counties per year - which comes out a little more than two coutnies per week. I hope to complete my quest in about four more years.

Our favorite experience of this past weekend was staying in the Grand Rose Hotel in Elizabethtown. This old riverboat era hotel the Ohio River was established in 1812, making it the oldest hotel in the state. It was amazing to learn that Elizabethtown, with a current population of 350, was once larger than the city of Chicago. Other things we saw included Cave-in-Rock State Park, a place where river pirates once hid out from the law, and Garden of the Gods - very picturesque rock formations - in the Shawnee National Forest. These are remnants of an ancient mountain range called the Shawnee Hills. In Pope County we discovered a sobering monument to the Trail of Tears, memorializing thousands of Cherokees who traveled this way - hundreds of them dying in Illinois - during their forced trek westward. Several other interesting sights of human and natural history, such as the Cave-in-Rock ferry and the oldest Baptist church in Illinois, made me very happy that I visited this off-the-beaten-path corner of Illinois. We found it to be a fascinating part of our great land that we would have never seen if it were not for counting counties.
Posted by J. Stephen Conn at 7:14 PM

This is really interesting for me ... I recently discovered that my father's grandfather, George A Scott was shown as the(a) constable in Elizabethtown in the 1900 Federal Census. My dad was born in Rosiclare in 1913 and we *almost* visited there in 1954 on our way from Akron to Corpus Christi, TX. I'm trying to learn all I can about our Scott family and it is providing me with some neat twists and turns...thanks.
Chris Scott