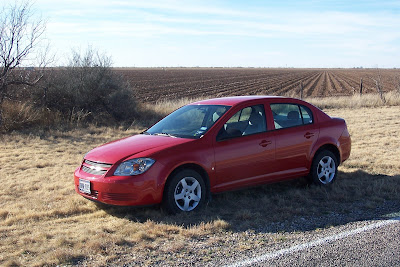 During two weeks in late February and early March, 2009, I put more than four thousand miles on this car, rented at the Dallas/Fort Worth, Texas airport. On that trip, which took me on a very zig-zag route around the state, I completed visiting my final 90 of the 254 counties in the Lone Star State, and also completed several counties in Oklahoma.
I've heard other county counters brag about collecting 20 or more counties a day in wide open areas like this. Personally, I averaged seven counties a day, going from dawn to dusk, but stopping often along the way. Still, I felt like I was cheating myself my rushing through so many towns and rural areas without seeing all they have to offer. To me, there are only two kinds of places on earth, those I have never visited, and those I have visited but hope to return to someday to explore more thoroughly.
. 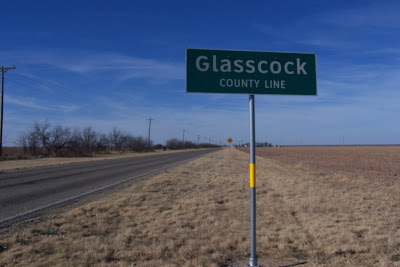 In these two photos I have stopped to take a few pictures at the Glasscock/Reagan county line on Texas Ranch Road 33.
With 254 counties, Texas has by far the largest number of counties of any state in the United States. The second highest number is 159 counties in Georgia. Tiny Delaware has the smallest county count with only three. The average state is subdivided into 66 counties.
Posted by J. Stephen Conn at 10:59 AM

Hope you had fun in my home state!

I'm sorry you had to finish your Texas counties in such a drab, scarcely populated area!

I can definitely attest that Texas is huuuuge. I've lived here since 1993 (in Austin, DFW, as well as Houston) and I've only managed to get 167/254 counties.

I can't wait until the Extra Miler Club rotates its way around to Arlington in 2010. I will definitely be there, even if I don't have a chance for new counties!