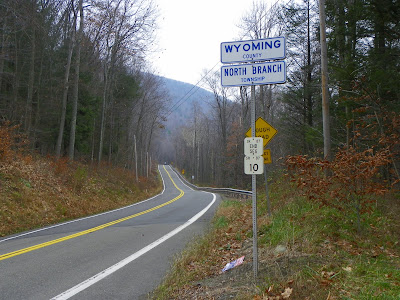 This past week I took a road trip in which I completed visiting each of the 67 counties in the beautiful state of Pennsylvania.  I stopped to take this photo upon entering Wyoming County from Sullivan County, traveling east on PA-87. Wyoming County was my 66th Pennsylvania county and #3,042 in my overall quest to visit each of the 3,142 counties or county equivilents in the United States at least once in my lifetime. From here, there are only 100 counties to go.

The first time I remember visiting Pennsylvania was a trip to to preach revival services in a church in Erie in August, 1964.  I was a 19-year-old youth evangelist then.  Nine years later I moved to the Keystone State for a total of four years (1973-1977), living for one year in the Philadelphia area and three years in Harrisburg.  During that time, and on subsequent visits, I traveled over most of the state.  Still, a few spots waited to be filled in on my County Quest.

I have seen much of Pennsylvania on foot - hiking literally hundreds of miles through the state during the time I lived there.  My hikes included the entire 232 miles of the Appalachian Trail in Pennsylvania, from the Maryland, on the Mason-Dixon line, to the Delaware Water Gap on the New Jersey state line.  Also, I hiked the entire 140 mile length of the Horse Shoe Trail, and parts or all of several other Pennsylvania trails.

Before ever visiting Pennsylvania, I always thought of it as a place of big cities and heavy industry - like steel mills.  Actually, most of the state is made up of beautiful wooded ridges interspersed with fertile green valleys, clear running streams, abundant wildlife, and some of the prettiest farms to be found anywhere.  "Penns Woods"  is a state of delightful discoveries.
Posted by J. Stephen Conn at 11:16 PM 1 comment:

Geographical Center of the United States 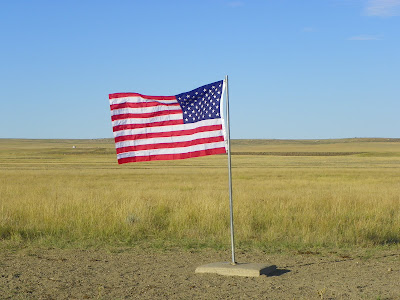 Travel to every county of the United States and eventually you may come across the center of the whole country. I did just that in a visit with my wife to South Dakota this past September - and we discovered that the "Center of the Nation" is in the middle of nowhere.

This flag, on a private ranch in Butte County, South Dakota, marks that spot. We found it by following an unpaved road for several miles, then climbing through a barbed wire fence and hiking the last hundred yards or so. The nearest town is Belle Fourche, about 20 miles to the south.

Embedded in concrete at the base of the flag is a reference mark (Center - No. 1) placed by the U. S. Coast Guard and Geodetic Survery in 1962. The flag and marker is surrounded by open prairie as far as the eye can see in all directions. It's a great spot in which to stand and contemplate the eternal verities of life. 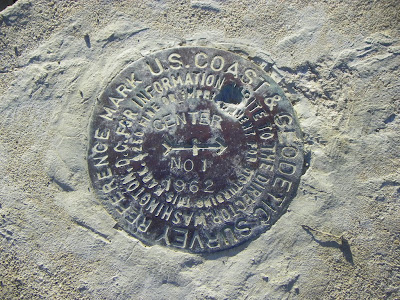