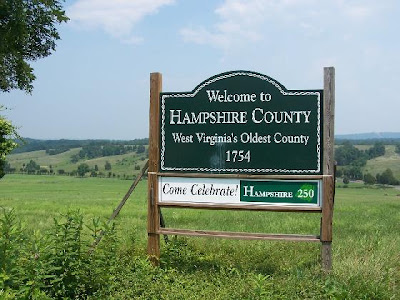 There are 3,141 counties (or their equivalents) in the United States of America, and there are a relative handful of obsessed people who are hell-bent on visiting every one of them at least once in their lifetimes. I'm one of those people - a County Counter.

I began collecting states as a child, traveling across the country with my Dad and brothers. But it was not until 1995, at the age of 50, that I consciously began counting counties. I had taken a vacation to New England, and on that trip fulfilled a lifetime dream by visiting my 49th and 50th states, New Hampshire and Maine. After spending a couple of days exploring a few spots in New Hampshire (Mt. Washington, Saint-Gaudens National Historic Site, etc.) It was time to travel on to Maine. I felt it somehow appropriate that I should visit my 50th state at the age of 50.

It was a momentous occasion for me, so I parked the car on the side of the road about 50 yards short of the Maine state line on US-2 and ceremoniously walked into Maine as my son, Jeromy, snapped my photo. We were in Oxford County.

Not content to just step across the line I felt I should at least see a little something in the Pine Tree State, although our time was limited. We drove about a dozen miles into Maine to the little town of Bethel, where we got out, walked around the village center and browsed in a couple of the shops. Then we drove all the way back across New Hampshire to Vermont where we spent the night in a condo.

Feeling proud and satisfied with my accomplishment, I pulled out the road atlas that night to reflect back on my travels - to all 50 of the United States. My feelings were the same I have heard other travelers speak of after reaching the end of a long-time goal - both a sense of elation and of being let down all at the same time. The list of 50 states was complete. I felt I had been everywhere in the country and there was no where new to go - at least not in America.

It was then, while pouring over the atlas, I realized that although I had been in every state there were hundreds of spots on the map that I had not yet explored. That very evening I determined that I would begin my travels again - this time to visit every county. A tingle of excitement swept over me as if experiencing a new revelation. I had a fresh goal; my travels had just begun.

Over the next couple of weeks I carefully went over the records of my past travels and memories with a county map of each state. I listed only the counties for which I had a clear recollection of having visited. I had been to 1,035 counties - less than one-third of the whole. I determined that within the next ten years I would travel to them all, at a little more than 200 counties per year.

It's been 12 years now and I'm still far short of that initial optimistic goal. It's not that I've been slack, but that I had simply underestimated the enormity of the task. As of January 1, 2007, I have now visited 2,518 counties (just over 80% of the total) and have completed every county in 14 states. At my present rate I figure I have a fairly reasonable chance of visiting the last county within the next five years, but not without a very concentrated effort. The counties yet to go keep getting harder to reach.

I have begun this blog to record my personal record, as well as thoughts, statistics, county information and travel adventures. Occasionally I will also be sharing stories of other County Counters like myself. If you happen to discover this blog, and the idea of county counting intrigues you, please check back from time to time as I expect to make updates often. If you have thoughts, ideas or adventures in county counting to share, I'd love to hear from you.
Posted by J. Stephen Conn at 8:00 PM