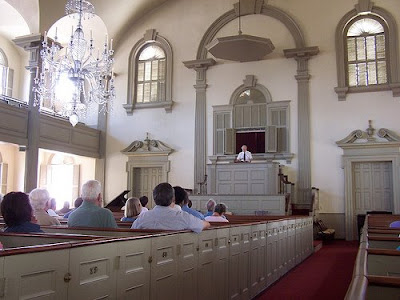 It was a hot Sunday morning in July and I was taking a walking tour of downtown Providence, Rhode Island, when I passed this historic church. Being a Baptist minister and a history buff, I was aware of the church but had not planned to visit services there. However, the Sunday morning worship was was just beginning, so on an impulse, I slipped in and had a seat. I was dressed in shorts, a T-shirt and tennis shoes but the folks there made me feel very welcome. They lived up to the slogan that was on the sign out front: "We reserve the right to accept everybody!"
- 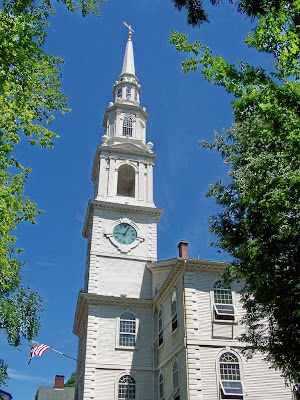 The First Baptist Church in America was founded by Roger Williams in Providence, Rhode Island in 1638. Williams, known as "The prophet of religious freedom," broke from the Church of England to establish a democratic church which would be a "shelter for persons distressed of conscience" It was a magnificant old building that could easily seat several hundred people - maybe a thousand - but that morning only about 70 folks were present, including several visitors like myself.
The music was decent. The sermon was better and livelier than I expected. The pastor, a jovial, middle aged, white haired man with a full beard preached in his shirt sleeves in the unairconditioned building. With all due respect, he looked like a cross between Santa Claus and the Pillsbury Dough Boy - with a distinct southern accent that made me homesick. Curious, I stayed afterwards to meet the pastor, Dan Ivins and wife Libby, and learned that they were both originally from East Tennessee, not far from where I grew up. Seems to me that most of the best preachers come from the southern Appalachians, and even the people in New England have discovered that.
www.fbcia.org/
Posted by J. Stephen Conn at 12:58 PM