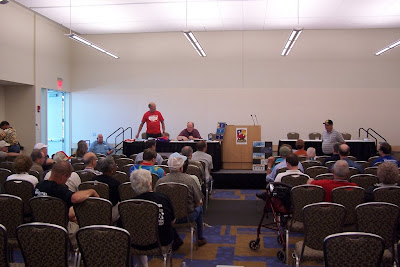 I had been counting counties for several years before I learned that there were other people who did the same thing. In fact there's a club of such like minded intrepid travelers with an obsession to visit each of the 3,142 counties or county equivalents in the United States at least once in their lifetime. It's called the Extra Miler Club and was founded in 1974. I became member #360 when I joined a few years ago.

The club is a very loose knit group of folks who meet once a year in some different spot around the country. I've been privileged to attend the last two meetings, Salt Lake City, Utah, in 2008 and Erie, Pennsylvania on June 27, 2009. Thanks to the magic of the Internet, county counters have found each other and probably most people in America who seriously collect counties are now members. Still, it's a rather small group.

The meetings, which last less than two hours, are lighthearted and fun. They consist mostly of each member being given an opportunity to report on recent travels and the progress of their county quest. The club also puts out a bi-monthly newsletter called the Extra Milepost, in which members can keep track of each other's progress.

Extra Miler's are famous for taking the long route, zig-zagging across the country on secondary roads to pick up another county - like going from Ohio to Colorado by way of the Dakotas, and returning through Texas, as I have done. I love the club's motto and fully agree:

"The shortest distance between two places is NO FUN."

You can learn more about the Extra Miler Club, including how to become a member, by going to their website. http://www.extramilerclub.org/.
-
Posted by J. Stephen Conn at 6:59 AM

Stephen,
I thought you and your readers might be interested to know that there are now a complete set of county quizzes available at PurposeGames.com. I created an online spreadsheet with links to all of the county games available there.

After joining PurposeGames in April, I took it upon myself to create quizzes for those states which did not already have them. The quality of the existing games is variable, but at least there is a complete set.

My map at mob-rule

PS> At PurposeGames my handle is slaaty. I make other games too there.