Lost Counties May Be Re-established in Georgia 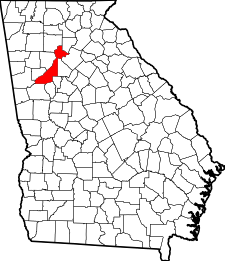 Fulton County, Georgia
Formerly Fulton, Milton & Campbell Counties
Georgia, the largest state in land area east of the Mississippi River, has 159 counties - more than any other state except Texas. Before 1932 there were 161 counties in Georgia. Then during the Great Depression, both Milton and Campbell counties were merged into Fulton County (Atlanta) to form the odd-shaped elongated county which still exists today. Now there is a move under way that would restore the three counties to their original boundaries.
.
Unfortunately, the Associated Press has tried to sensationalize this and make it into a racial issue. Having lived for 15 years in Georgia, and having many family members who are lifelong citizens of Fulton County, I agree that the division of Fulton County would be a good move and I strongly object to the charge that the proposal is racially motivated.
.
By the way - most of my kin who live there are in the "original" Fulton County and would not be a part of the re-established Milton or Campbell counties if the division takes place.
.
Below is the AP release:
By DOUG GROSS, Associated Press Writer Tue Jan 23, 2:27 PM ET
White Atlanta Suburbs Push for Secession

ATLANTA - A potentially explosive dispute in the City Too Busy to Hate is taking shape over a proposal to break Fulton County in two and split off Atlanta's predominantly white, affluent suburbs to the north from some of the metropolitan area's poorest, black neighborhoods.

Legislation that would allow the suburbs to form their own county, to be called Milton County, was introduced by members of the Georgia Legislature's Republican majority earlier this month.
Supporters say it is a quest for more responsive government in a county with a population greater than that of six states. Opponents say the measure is racially motivated and will pit white against black, rich against poor.

"If it gets to the floor, there will be blood on the walls," warned state Sen. Vincent Fort, an Atlanta Democrat and member of the Legislative Black Caucus who bitterly opposes the plan. Fort added: "As much as you would like to think it's not racial, it's difficult to draw any other conclusion."

The legislation calls for amending the Georgia Constitution to allow the return of Milton County, which succumbed to financial troubles during the Depression and was folded into Fulton County in 1932.

The former Milton County is now mostly white and Republican and one of the most affluent areas in the nation. Atlanta and its southern suburbs are mostly black, are controlled by Democrats and have neighborhoods with some of the highest poverty rates in America. (Buckhead, a fashionable Atlanta neighborhood of clubs, restaurants and mansions, would remain in Fulton County.)

"The only way to fix Fulton County is to dismantle Fulton County," said state Rep. Jan Jones, the plan's chief sponsor. "It's too large, and certainly too dysfunctional, to truly be considered local government."

Jones, a former marketing executive who lives in the Fulton suburb of Alpharetta, cited the county's troubled library and public transit systems and a jail that was taken over by a federal judge because it was filthy and unsafe. He denied the move is racially motivated.

Don Petree, the 62-year-old owner of Don's Hairstyling in Roswell, another northern Fulton suburb, said many of his customers "feel like they're not being taken care of like they should be with the tax dollars they're spending. I think there's some truth to that."

Milton County would have a population of about 300,000, instantly making it Georgia's fifth-largest county.

Residents of north Fulton represent 29 percent of the county's population of 915,000 but pay 42 percent of its property taxes, according to a local taxpayers group. A split would lead to the loss of $193 million in property taxes alone for Fulton County.

About 25 miles to the south in downtown Atlanta, the Rev. J. Allen Milner said he is afraid the tax revenue loss would have a devastating effect on those who need government help the most.
"If you take that money out of their coffers, human services will suffer greatly," said Milner, a black man who runs a homeless mission and is pastor of the Chapel of Christian Love Church.
Critics of a split also worry about the future of Grady Memorial Hospital and the Atlanta area's MARTA commuter-rail system — both of which have contracts with the county.

In addition, some warn that a breakup of Fulton could harm Atlanta's international reputation as a progressive city and hurt its appeal as a business, entertainment and convention destination.

While other Southern cities erupted in violence a generation ago, Atlanta came through the civil rights movement with little strife, earning the nickname The City Too Busy to Hate. It is now home to one of the nation's largest black middle-class communities.

"This would send a clear messages to companies around the country that Atlanta may not be as progressive as it would like people to think," Fort said.

The measure would require the support of two-thirds of both the House and Senate. Then it would have to put to a statewide vote. Also, residents of what would become Milton County would have to endorse the plan.

While Republicans have majorities in both chambers, they would need to win over three Democrats in the Senate and 14 in the House to get it passed.

The legislation has support from some of the Legislature's key leaders. Republican House Speaker Glenn Richardson has referred to his top lieutenant, Rep. Mark Burkhalter, as "the member from Milton County."
____________________________

My Brother-in-law, Eddy Robbins, who lives in the Atlanta area, had this to say in an email about the possible split of Fulton County:

"Once again, it seems like something is racially motivated when it is really not the case. Fulton County is a very long county north to south. If you live in Alpharetta and you need to go to the county for anything, you have to drive through the traffic to get to downtown Atlanta. it is no fun. So, what is proposed is a split of the county on the north side, forming Milton County that would include Sandy Springs, Roswell and Alpharetta. It would be the 6th largest Georgia county. It was set up that way originally but was merged into one county for financial purposes many years ago.
.
"This article makes it seem like it's racially motivated. There are plenty minorities on the north side. Also....what is not mentioned in this article is the fact that a mostly black area on the south side is wanting to do the same thing and form Campbell County."

- What happens to the schools built in North Fulton? Can a Milton School System be formed?
- Would a Milton School System have to buy existing schools from Fulton County Schools?
- If SPLOST III passes will Milton residents continue paying the 1% sales tax to Fulton Schools until it expires in 2012?
- What are the boundaries on the southern side of Milton are you including Buckhead?
- If Buckhead is included would the schools be purchased from Atlanta Public Schools?
- How do you handle the all of the bonds predicated on the existence of Fulton County? Won't they all need to be restructured?
- Will taxes in Milton County be reduced or frozen by statute?
- How much will it cost to build Milton jails, courts, sheriff's office and libraries?
- Would county facilities need to be purchased from Fulton County like Sandy Springs paid for Fire Department buildings?
- What happens with the contribution to MARTA from what would be Milton. Does it go away?
- What happens to the funding for Grady?
- Will the referendum to form the county be a countywide Fulton vote?

I'm not automatically for or against re-establishing Milton County (or Campbell County for that matter -- why not?), but some things occur to me: There are a lot of bonds that Fulton County has issued -- a legal split would require a legal split of the debt. Also, we found out in the Roswell East presentation last Sunday ( info site is Roswell East ) that the way sales tax works, the sales tax is collected county-wide, then redistributed to the cities -- so 9% of sales tax paid on stuff bought at Phipps Plaza goes straight into Roswell coffers -- if we are in different counties, that stops. Of course, 9% of sales tax paid on stuff bought at North Point Mall also goes into Roswell's coffers, and would stop going into Atlanta's coffers, so we'd have to evaluate it -- but it's not totally obvious that we'd be better off financially.

We would definitely be better off in terms of controlling our own destiny, out of the grasp of the people on the Fulton County Commission, and that might be worth it even if it costs a little more.

Buckhead would never be included, none of the City of Atlanta would be inside Milton County so this is a non issue.
All bomds would have to be restructred.
SPLOST would stay in place but Milton's portion would be split off and used in Milton County.
Assests owned by Fulton Co. like fire stations, police stations, office buildings, fire trucks, cars, equipment, etc would all be purchased by Milton County....if they wanted it.
Schools would also be purchased by Milton.
Building a court house and funding a Sheriff's Office would be pretty expensive but totally possible given that everyone pays for the Sheriff even if they live in a city.
I think its a great idea. The reason there are so many new cities in Fulton County is becuase citizens were tired of crappy county services like police, fire, roads, parks, etc.

Turning government over to corporations just seems way too bizarre and surreal. Even less accountability than when under democratic control. But hey, at least your friends can profit. Plus, I guess we can always revoke a corporate charter, as we always could throughout US history. It is our sovereign right over our legal creations - corporations.