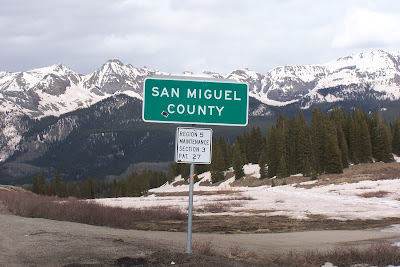 On Saturday, May 1, 2009 I entered San Miguel County from Delores County, Colorado, thus completing my visits to each of the 64 counties in the Rocky Mountain State. I was traveling with my older brother, Philip, who recently retired as president of Western Oregon University. It was our first time to travel together since we were teenagers, growing up in East Tennessee.
Philip joined me for a week long trip across southern Colorado where we visited my; final seven Colorado counties. We were traveling north on CO-145, the San Juan Skyway, heading toward Teluride, an old mining town which is now a trendy vacation spot, especially popular with snow skiers.
The first time I entered Colorado had been in the summer of 1964. I was 19-years-old then, having just finished my freshman year of college. I was traveling from Dillon, Montana, where I had spent the summer, en route to Dallas, Texas for a church convention, and then back home to Tennessee.
I've been in Colorado about 20 times over the years, for a variety of reasons, including visiting my son, Christopher, who lives in Denver. This trip illustrates why county counting is so fascinating. Although I had been in Colorado numerous times over a span of almost half a century, there are several hidden corners of the state I would have missed if it were not for this obsession I have to collect every county.
On the trip we visited three national parks: Great Sand Dunes, Grand Canyon of the Gunnison, and Mesa Verde. I had been to the Grand Canyon of the Gunnison once before, and had visited Montezuma County - home of Mesa Verde - way back in 1967, but did not make it to that National Park until this trip. 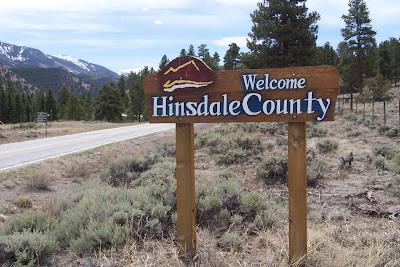 As is often the case, my favorite counties on this trip were those remote spots which are seldom visited by the average tourist. These included Hinsdale County, with a population of only 790, and Custer County, where we enjoyed spectacular views of the Sangre de Cristo Mountains and had an impromptu meeting with the honorable Allen Butler, the mayor of Silver Cliff, Colorado.
Posted by J. Stephen Conn at 3:20 PM