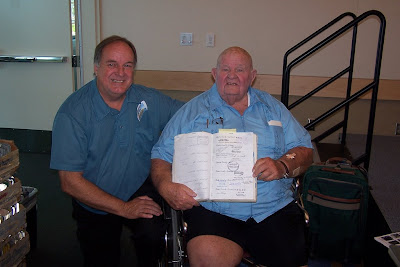 Here I am with world traveler extraordinaire John Frankenfield from Florida, at the Bayfront Convention Center, Erie, Pennsylvania. We are at the annual meeting of the Extra Miler Club, June 27, 2009.
John is holding up one of three thick ledgers in which he has collected official government stamps from the places he has traveled. One of the ledgers contains stamps from 223 countries of the world. The other two ledgers are from the county seats or couthouses in each of the 3,141 counties or county equivilents in the United States. John completed visiting every county in 1994, thus becoming only the ninth person in history known to have accomplished such an extraordinary feat.
No other county collecter has documented his or her travels as thoroughly as has John Frankenfield. He's got my utmost respect and admiration, and also a bit of envy.
http://www.extramilerclub.org/
-
Posted by J. Stephen Conn at 6:30 AM